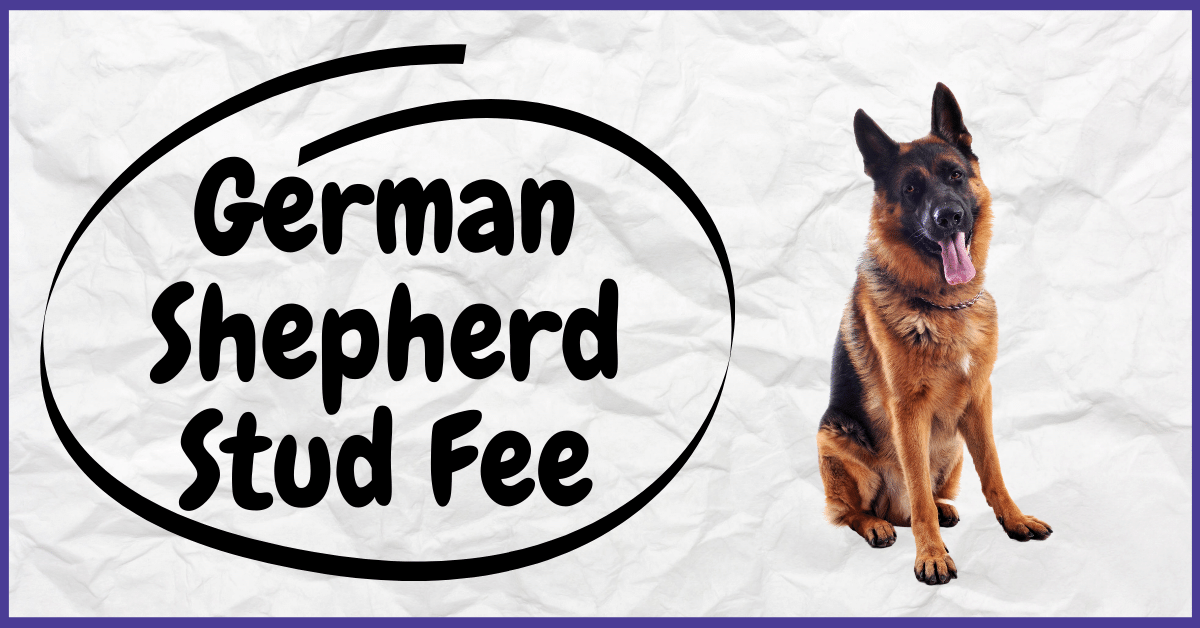 Besides, you can check German shepherd stud service prices in your area or town to get a perfect idea or you can search for a stud service provider online in your country.

Also, there is a very rare and popular type of GSD stud high in demand than standard German Shepherd stud which includes:

White German Shepherd is one of the rare GSD because of the gorgeous white coat that makes it exclusive from all the colored variants. These are great family dogs as they share almost the same traits and temperament of standard GSD but with the only difference of white luxurious furry coats.

Since white GSD is not so common therefore you can expect a higher stud fee. On average white German shepherd stud fee is around from $1400 up to $1700.

It has not been long since the breeding of black GSD has grown drastically. The credit of their growing popularity goes to their beautiful long coat of black hair.  Unlike standard GSD, black German shepherds are highly rarer whereas there are not as many health concerns for the breed. Black GSD are uncommon and pricey too, roughly, they are around twice the price of non-unique German Shepherd stud.

They are great energetic companions and known for stable and pleasant temperament, as well as black GSDs are extremely calm, friendly, and loving dogs. Black German shepherd stud fee, though, can vary somewhere between $800 up to $3000, while the difference in charges is mainly based on pedigree quality.

What are the Factors that Determine Stud Charges?

Let’s check out the key factors that decide how much you should charge for dog stud services:

In fact, the breeders can easily pay more stud charges when the dog is in its 2+ years age or lower than four years.

Although it comes second on the list the health of the dog is the most significant factor which determines a good stud fee. Your dog has to go through various tests to be an official stud in order to prevent common dog genetics and conditions.

It is also important to have proof that your stud is not risked with some breed-precise diseases for example in the German shepherd breed elbow and hip dysplasia are common health concerns.

In short, there is a high demand for healthier dogs and thus the higher the stud charges will be.

The registration, however, is not the quality symbol still some potential breeders think it’s good to have certification from a reliable organization or registration of AKC.

When your stud is registered from AKC or certified by an equally reputed organization increases the value of stud automatically. In this case, the certification or registration assure that the stud’s physical health meets all standard requirements well.

Other than health, breeders are also very much interested in the family history of a stud. The family history of dogs shows the health of his parents and even grandparent’s health, such data can help them decrease the risk of genetic diseases in upcoming generations.

In case you offer a long, detailed family history of your dog to breeders which shows the dog has a good health history of ancestors may enable you to surge the stud fee higher.

It will be extra beneficial if your stud has won any favorable rank or award or even enrolled in any contest or show.

As breeders are excitedly willing to produce champion or star pups, this is one of the much-admired factors enabling you to increase champion German shepherd stud fee.

My name is David John, but everyone calls me Davey! I'm just a hardworking boy next door that has a passion for Dogs. There's nothing better than cuddling up next to my pet dog after he gets home from work each day. Sometimes we take long walks together through our neighborhood park and sometimes we even play games together at night before bedtime!

Your German shepherd always pulls you away with pressure and you feel like getting dragged. The dogs do such things sometimes and you are reluctant as you think you might hurt your pet in controlling...

It’s an instinct for dogs to chew on stuff. Especially German shepherds who love to gnaw and nibble. With dogs that are your constant companions at home and outside, their recreational needs are a...

We are participant in the Amazon affiliate advertising program designed to provide a means for website owners to earn advertising fees by advertising to Amazon.